Uzebox Tactics is a turned based strategy game which is inspired by the game Advance Wars for the Gameboy Advance. Also some games like Batle Isle, Tom Clancy's Endwar or C&C took influence. It was started in 2014 by Edward Shin unfortunately not finished. Until now! 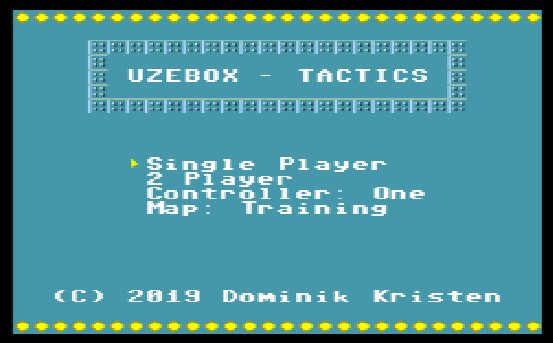 For now only 2 player game is possible!

Select one player versus CPU or two player against a friend. For now only two player game is possible. Choose if you want to use one controller or two. Also select the map you want to play. For now there is only one map to play and another for training.

Each team has different units available which are characterized by movement points, attack strength and defense strength

If an unit has moved or attacked, the respective green lamp in the statusbar will turn red.

The terrain on a map affects unit movement, and the defense attribute of units stationed in the terrain. The different types of terrain include: plains, forest, bases, cities and mountains. All units are affected by terrain.

List of movementpoints which will be used per step on the respective terrain:

A unit starts with 100 healthpoints. On the left side, under the teamname appears a number when a unit is selected. This is the number of units in total the selected unit consists of. So for a HP of 100 there will be 10 units left.

To attack other units you have to know that every unit has a different range to attack. For example: The infantry can only attack enemies if they stand right next to each other. The rocket launcher for example got 4 range points and can attack on a larger area.

The next point is the defense. A unit which is placed on plain terrain got no good defense and would be easy to destroyed. To get a good defense, you can place your units in forests, mountains, cities or bases.

A is the lowest damage and E is the highest damage.

If the HP of an unit is zero, the unit is destroyed and vanished from the map. But you can heal your units during the game. For this, move your unit either to a base or a city which is conquered by you! In a base you get +10 HP per round. In a city only +5.

Every conquered city or base brings you credits. Every destroyed enemy unit brings you also credits. You only loose credits when you loose an own unit. The use of credits are only for highscore and winning at this moment.

To conquer a city or a base you only have to move a unit exactly to the place. A conquered building can also recaptured by the enemy.

A game is over when one team is destroyed.