Das Boot is a submarine simulation which takes place in a fictional war. The eponymous german film 'Das Boot' lent the game soundtrack, title and name. In the simulation, you command a submarine in the pacific with which you must sink enemy destroyers and submarines. One of the first simulations on the Uzebox, this game uses all the memory, and input functions on gamepad. 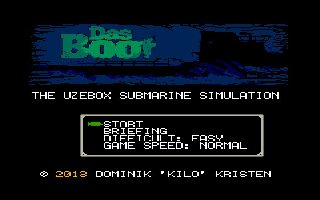 Das Boot uses the entire gamepad. Although it is still difficult at the beginning, after a while you get a feeling for the controls.

In the main menu you can adjust the difficulty level and the speed of the game. In the easiest level you must reach level 15, at the average level, it is level 10 and in the most difficult stage, you must make it to the level 8! Therefore the game on Easy level takes much longer than in the hard one. After completing all three difficult levels, on the main menu appears the writing 'freegame'. Now you can play the game without level limitation! The completed stage will be checked and stored in the EEPROM.

When you click on 'briefing', you will find an explanation of the controls.

Look at the picture to know the instruments.

On the left we will have the 'Health' indication. Health decreases with enemy fire and on every dive. In a health of 0 percent, you're dead. You will see a message and a mourning ceremony for the fallen crew. The ceremony is individual and depends on the level reached by the victories achieved.

Underneath there is the 'Radar'. The radar shows about the direction in which there is an enemy ship. It is not always the correct number of degrees. You can always deviate from the right course.

On the right side is the 'Score' and the 'Level'. These are self explanatory.

On the lower side there is 'Bearing' which shows your current course.

Shows the distance to the enemy ship. In order to get these information you have to turn your scope until the enemy ship is in the middle of your scope. Red signal 'RANGE' will blink.

The distance, set of you. Can only be set when the target is in Range (means in the middle of your scope)

Watch the waters and looking for enemy ships. When contact with the enemy you have to bring the enemy ship in the middle of your periscope. Only then does the warning light 'RANGE' flashing. Now viewing distance to the target. This lets you choose now. Use the directional pad to and possibly the 'B' button to quickly set the correct distance. Only then you can fire. But beware: After some time, the enemy ship turns to you and also makes available its torpedoes. If that happens, the 'Danger' signal flashes. If you believe you can not be set right away and you think the enemy ship is about to shoot, then you can still dive. This maneuver takes away a bit of energy but you survive the attack with less damage. After surfacing, the ship is gone and you have to find the next. From level to level, the game becomes more difficult. The ships turn and shoot at faster and faster. You can save the game at any time and invite you to a later date.