This tutorial is all about getting sounds from different formats. This is designed to work in concert with Sound Effects An Easy Way and Music Step By Step, and you should read those if you haven't yet. I will describe the steps required to capture the sound we are after and convert it to midi notes. After that step, the previously mentioned tutorials cover the steps to bring it to a real Uzebox sound. I will add sections to this as I gain experience with different formats, basically any time I need to get a sound from a new system I'll show how.

This one is fairly simple and very much like Music Step By Step. Here we will be using the tool SPC2MIDI. This program is very similar to the program NSF2MIDI but not the same. The SNES had some more complicated songs generally, so the actual conversion of MIDI notes to your song is likely the hard part. Other than that there is nothing I can help with for songs, it is going to be manual MIDI editing. Before conversion, go to options->Advanced Settings. I would recommend trying these settings for each instrument to start with: 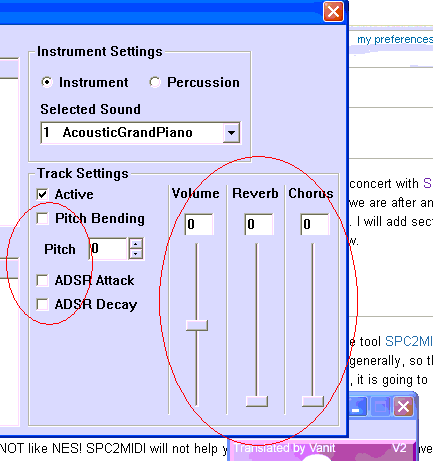 Sound effects on SNES are NOT like NES! SPC2MIDI will not help you here because they are of a waveform type. You can capture them by doing a wave dump in your favorite SNES emulator and then editing it and following PCM Sound Effects. Alternatively, using Patch Tool from Sound Effects Another Way in Uzem, and the wave dump of your sound in some playback program. You could loop the wave, and dial in a patch that sounds similar. This would be a feat of skill that I can't help you with :)

The sound hardware on this machine is much different than Uzebox, and so there very well may be instances where you will have a hard time making a decent effect with this method. I have used it for the "losing" sound effect on my game Columns, and am pretty happy with it(the PCM version was way too large). With some practice and additional work, I do think someone could do more extensive things than I have.

Now the good stuff. The current internet standard for Genesis music seems to be VGM. The old standard was GYM. I spent a long time trying to find the mythical tool vgm2mid, as apparently there are a couple programs that had this name. I found one that did not do what we needed, everything else was dead links and I believe this/these program are abandoned by their author(s). If you find one that will actually work please let me know so I can update this. My method will use the tool GYM2MID. The unfortunate part here is that most music you find on the net will NOT be in GYM format. I found utilities to convert GYM->VGM but not the other way around....sigh. So we will get the sounds from the game our self, using the emulator Gens 2.14. This is the only good emulator for windows that supports GYM, as far as I saw. In the future they might switch to VGM, but 2.14 does have it.

Ok so we have our tools, we need to start our game rom. Now you will have to get to a part in the game where the music or sound you want is played. If your game has a sound test you are in luck! So before the sound plays, make sure you go to sound->Start GYM Dump in the emulator, then make it play until it's complete. In the case of looping music, make sure the whole song plays and you will have to find the loop point manually in the MIDI conversion process. Now open GYM2MID, it will look like this:

I think you should probably use the options I have shown in the picture, although your sound may rely on other settings: experiment with your sound. Click convert, select your GYM dump and it will create an MIDI you will edit. From there it's just like my normal music method. A few things to note about the file created. It seems like there are "phantom tracks", that is some tracks that have a few notes that seem to add "fullness" to another track. They are probably off time by a small amount, as they are kind of like a reverb/chorus thing almost. Carefully listen to different combinations by disabling certain tracks and find out which ones are this way. There should exist your song/sound with perfect timing within the MIDI, but you will have to eliminate these excess tracks first. My game Columns music was done this way and it works. From here it is just like normal.