Hammurabi (named after King Hammurapi I) is a text-based economic simulation game written in FOCAL in 1968 under the name King of Sumeria by Doug Dyment on a PDP-8. It was ported to BASIC by David H. Ahl in 1973 and made known to a wider public through the book BASIC Computer Games. The game is a reduced version of The Sumerian Game, which was released in 1964, without any multimedia components. Hammurabi is now available in versions for almost every known platform, including Java and HTML5 and of course the UZEBOX. 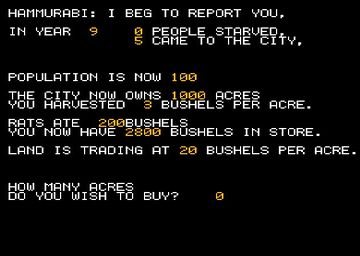 In the game you only have to enter numbers. This is done with the directional pad.