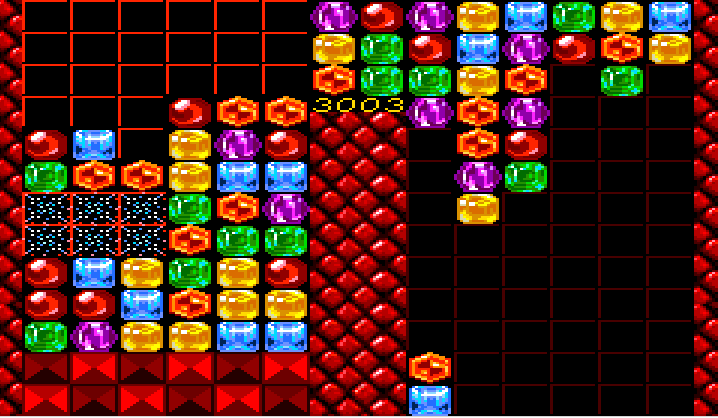 Columns is a fast paced puzzle game for your uzebox home console. The object of the game is to outlast your opponent by scoring points to force him into a tight position.

The game starts on the title screen asking you to press start. Doing so will open the main menu allowing you to choose SINGLE for a 1 player vs cpu, VERSUS for 1v1 human matches, and to set the cpu skill level for the single game. Once inside the game the round is ready to start and will display READY; simply press start to begin play. To pause the game press start. A menu will open allowing you to continue the current game or to return to title to change settings.

The game will start with 3 stones falling from the top of your well to the bottom. You can move them left or right into any of the 6 columns. You can also rotate the order of the stones to one of 3 possible arrangements to better layout your well. When you have moved your piece to position and have rotated it to your desire, you can hold down to drop it faster and get a few steps ahead of your opponent. After you have placed the piece another will begin from the top again. The game will progress until one player cannot fit their piece in the well.

Scoring will occur when 3 or more stones of the same color are touching either horizontally, vertically, or diagonally. More stones yield more points, for instance 3 red stones in a horizontal line adds 3 points to your score. 4 red stones in a horizontal line adds (3*2)=6 points, 5 in a row adds (3*3)=9 points, and 6 adds (3*4)=12 points! This works in the same manner for vertical and diagonal scoring as well. After a score has been made, the jewels involved in the scoring will explode causing all jewels above them to fall. This will make more space in your well and possibly cause another score to occur.

After scoring jewels explode and gravity has taken it's course, there is a possibility a score will happen immediately after because of these new positions. This is called a chain, and is an important tactic to learn to advance your skill level. Not only do chains clear more jewels from your well than a normal score, they offer more points. Consider the diagrams below to see an example of a chain in action.

Each time a chain occurs, the scoring values are mutlplied by a higher value. If you score 3 red stones on your first move which causes 3 yellow to align after gravity has occurred, you will not get 3 points for red + 3 points for yellow. Instead you get 3 points for red and 6 points for yellow. If after the yellow stones disappear 3 green stones line up they are worth 9 points extra for a total of 3+6+9=18 points! The normal scoring rules also apply so for instance if on your third chain you got 4 green stones to line up instead of 3, you would have gotten 3+6+(3*2*3)=27 points! Basically the first moves score in a chain is multiplied 1x, the second score is 2x, the third 3x, etc, and as you can see this can allow you to rapidly collect points to use against your enemy. 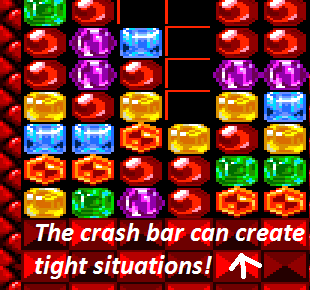 The reason you want more points is to attack your enemy, since he will certainly be attacking you! All attacking is done by the crash bar, a solid platform that comes up from the bottom of the well. The higher it goes the tighter space becomes and less options and opportunities for scoring are available. For every 10 points you can attack 1 crash bar point. So for instance if you have 13 points: 13/10 = 1 crashpoint you can use. You will have 3 points left over after the attack, and either your crash bar will go down(if it is not zero) or the enemies will go up. The more points you have the bigger the attack(up to 30 points). Points are not wasted, so if you have 30 points(3 crash points) and your crash bar is 1 high, your crash bar will become 0(costing 1 crash point) and the enemies will become 2 higher(costing 2 crash points). It is important not to be close to 30 points when you are about to make a big score because any points over 30 are lost! If you see your opponent in the middle of a long chain, you can expect a pretty big crash soon. This can be very dangerous so a good idea is to immediately use your attack if you see the opponent in the middle of a 3+ chain. Another benefit of crashing your opponent is that any active pieces they are moving will be destroyed! This is very beneficial when they get a magic or curse jewel they would love to use against you. Try it out, and save a few points in case they get something good! They may even return the favor... 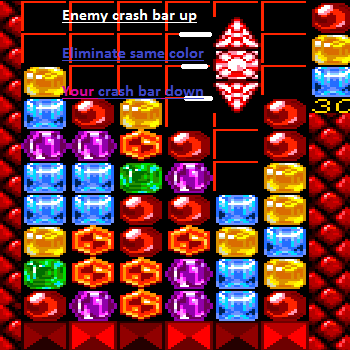 Magic jewels allow you 3 options in your favor. They are selected by rotating the pieces until the desired jewel is on the bottom of your active piece. If the down arrow is on the bottom(default rotation) your crash bar will go down 2 points. If your crash bar is less than 2 the down arrow can be a waste. If the square jewel is on bottom when your piece lands it will cause all jewels the same color as the jewel underneath it to disappear. You will score no points for the consequential scores/chains that result but you can gain a lot of well space back quickly if you're in trouble. The last option is the up arrow which will crash your opponent for 2 points, be sure to use this when you are in good shape. Also be ready with your decision and quickly drop it as your opponent will want to crash this piece.

Curse Jewels are special flashing jewels that have a negative effect for your opponent if they are scored quickly before they stop flashing. They are summoned when you score a 4x chain or better. The possible effects are:

Columns includes an AI cpu opponent to fight against. There are 10 different skill levels 0-9 each one progressively harder than the last. If you win against the cpu player, it's skill will be increased for the next round until it has reached 9. If you lose the level will be decreased until it has reached 0. In this way you can pick a cpu level from the main menu and play against it to warm up. As you practice and become better the AI will try to keep up until finally you will need to find a good human player for continued challenge. Though not invincible, the AI player can be a capable opponent even for a player with some experience.