@D3thAdd3r, yeah I still can't figure out how the bootloader got corrupted. My understanding was that those that come with kits have the memory where the bootloader resides locked, to prevent overwriting when loading games bigger than 61Kb?

@ry755, that sounds like a great idea! I will give it a go when I get back home. I had some time this morning and I already wired it up (with no other components) to the arduino. Avrdude sees the arduino as a programmer when I use the first command per this post, but it later gives the following error: "Yikes! Invalid device signature."

I'm gonna try with the oscillator and caps and report back. In the meantime if anyone has any other idea I'd be more than grateful!
Top

I managed to salvage an oscillator and some caps and just tried connecting it per ry755's suggestion. Still no joy \:
Top

Maybe Hartmut can help at this point since it seems you have exhausted most options. Maybe double check you had all the ISP connections to the right pins on the '644...at least for me I really had some trouble before(breadboard versions) and I just had things hooked wrong going by inaccurate orientation of the ISP socket.
Top

Thanks D3thAdd3r, I'm gonna triple check everything cause I'm out of options right now. I already contacted Harty cause my wife is about to kill me for the mess I've done with all the wires and solder balls lying around in the living room

Looking at the pictures here: https://www.hwhardsoft.de/english/projects/euzebox/ header K2 appears to be an ISP connector. But one picture shows the silkscreen for a 10 pin socket and another shows a 6 pin socket soldered to it. 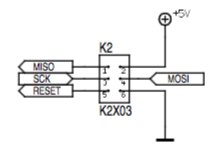 Try using this instead of taking the chip out. Make sure it's wired correctly though because the schematic has a 6 pin connector but the board has a 10 pin socket.

I don't know if it's actually a 10 pin ISP connector or if you only use the middle 6 pins.
Top

If you have a proper ICSP then I would suggest that. They are really cheap on eBay (even if knock-offs of the USBASP.) They DO work.

If you want to go the breadboard route be concerned with MISO and MOSI. One talks to the other one.

I have been looking for a picture of a breadboard ICSP I once built but I can't find it. I did use it to program the Uzebox chip though and it worked. Pay attention to MISO/MOSI. That is where I slipped up before I got my breadboard ICSP working.

BTW, I use one of the cheap USBASP now. For ten bucks or so it is totally worth it.

EDIT: To mitigate the issue of the ICSP port orientation, you could use the continuity test of a multi-meter to make sure that the ICSP pin is going to the correct pin on the ATMEGA644. Good luck!
Top

I suspect that your bootloader might not actually be corrupted, rather one of the followings might apply:
I don't think the bootloader got corrupted if it worked once. On a properly fused ATMega, first always the bootloader starts, only that passes control over to the game if the conditions for this are right (there is a game programmed, no button is held down, and booting to game was selected last time). So if it was corrupted, you most likely wouldn't be able to play the game.

Anyway, if the fuses are wrong, you will have to use an ISP to set them right! By the way I have this programmer: https://www.sparkfun.com/products/9825 , and it works just fine with the E-Uzebox I have. Just mentioning, that I didn't need to do anything to the E-Uzebox to program it (at least with this programmer).
Top

On some versions of avrdude, after doing something and you get the usual output, the hfuse and efuse labels get swapped. My version of avrdude was compiled before that got fixed so mine has that issue.

(You might have a newer version, so this might not apply to you. I just thought I'd let you know so you wouldn't get confused just incase you have an old version with that typo.)

EDIT: Also, if you're using an Arduino as ISP, use

It helped fix some of the errors I was getting.
Top

Guys, you can't believe how thankful I am! IT WORKS!!!!!!!! ry755 extra thanks to you man, for suggesting to burn the bootloader with the chip onboard! It worked first time and without a hitch!
The only think I omitted was to mess with the lock bits after burning the bootloader. I guess I have to be careful not to put any games > 61440Kb.

Again thank you all from the bottom of my heart!
Top

immortalx wrote: ↑
Fri Dec 29, 2017 8:37 am
Guys, you can't believe how thankful I am! IT WORKS!!!!!!!! ry755 extra thanks to you man, for suggesting to burn the bootloader with the chip onboard! It worked first time and without a hitch!
The only think I omitted was to mess with the lock bits after burning the bootloader. I guess I have to be careful not to put any games > 61440Kb.

Again thank you all from the bottom of my heart!

By the way could you recall / reproduce the situation? As far as I see, Arkanoid is smaller than 60K (it is 56K by compiling from the current master), and also the packrom tool which generates the .uze files should refuse to make them larger than 60K. So if it still happened (I don't know whether the 0.4.5 bootloader is adequately protected, the 5.0.09 loader should be), we have some problem somewhere which should be fixed to prevent others bricking their Uzebox.

You may also do a test with this, more than once (I mean load it, let it run to see how it responds, load a game, then load the tester again, see what it does etc). The 0.4.5 bootloader does not guard against bad reads from the SD card, and it seems like it isn't especially uncommon to experience such (not very common either, but happens with some combinations of cards, sockets and soldering). If the card is weak in this regard, you will get randomly failing games (as there is no indication whether the read and program failed in any manner). The tester can reveal if your Uzebox has such problems.
Top
Post Reply
32 posts