Ah, crap. Then I need to read the datasheet. I was looking at the pinout and thought they were on PORTB!

Ooops, my bad, you're right IT IS portb! Looked at the wrong port. 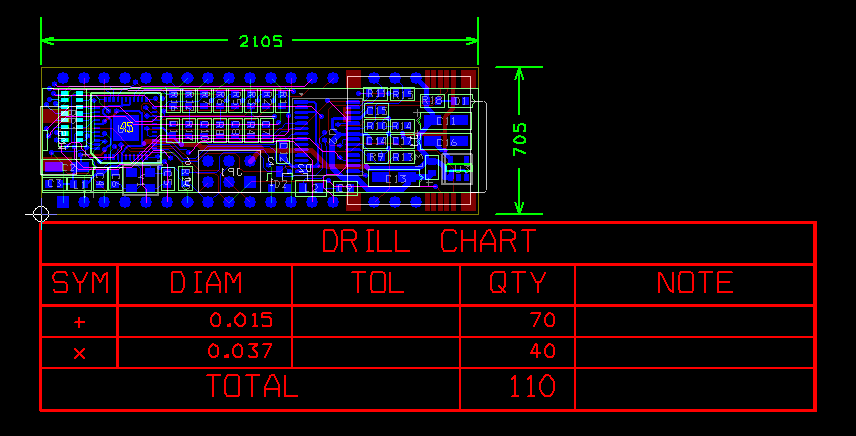 Here's a 1:1 plot with the microSD socket shown with a USA quarter: 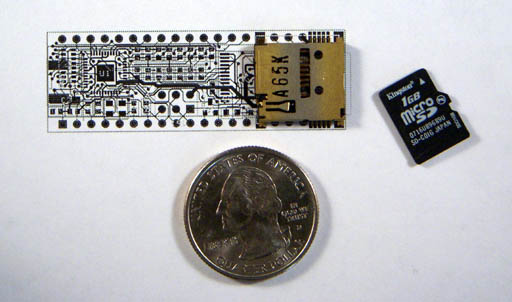 I did have to go to four layers for the PCB in order to get all the port signals out to the pins. I did manage to keep 6 mil trace/space and 15mil drills though, so it'll be relatively inexpensive.

I'm going to try the "upside down" mounting for now. (AKA, component side down. I dont think any of the component side parts are taller than ~1mm or so, so the plastic skirts on the pins (0.1") will set the maximum mounting height. I put the ISP connector on there (accessable from the "top" side), but I'm not convinced we need it. (The signals go out to pins too, so it could be on the baseboard.) I figure it'd let me just clip on a 5V and GND connector from a PSU and run it with an AVR ISP2 though, so why not. Easier to take stuff off later than add it on...

I didn't put any filtering on the audio output either-- figure that's a better baseboard thing so that the complexity of the filter can be tailored to the quality of sound output desired.

That is sweet. Would you sell these pre-assembled? I'm not sure that my soldering skills are that good.

CompMan wrote:That is sweet. Would you sell these pre-assembled? I'm not sure that my soldering skills are that good.

Yeah, I'll just have our boardhouse run 'em. 0603's and 0.5mm pitch QFN's are a little tedious to do by hand. (I'll hand build the prototypes, but once they're working it'll be easier to just have them assembled.)

I'll make a couple different baseboards with different features as well-- those could also just be hand-built by whoever wants to do their own one-offs too. I just wanted to get the "base" stuff all on the little module so that everyone starts from a same 'compatible' base. (And I like seeing how small I can make stuff and still have it be 'reasonable' to manufacture, so this is kinda fun for me too.

Wow, I'm quite impressed. It's as small as the parallax basic stamps. Plus we have video, sound and SD...Cool Factor Alert!

I put the ISP connector on there (accessable from the "top" side), but I'm not convinced we need it.

Its so small now, putting that big bulky ISP connector is almost like a sacrilege!

As long as there's a baseboard available at the same time, perhaps the stamp would look shaper without it?

Will it fit in a standard breadboard?

Yes, it will have the exact same pinout as a 40 pins DIP. Nice huh?

So your saying you could almost fit an Uzebox onto an Uzebox. That is sweet. I can't wait to get one.

We still need to get that SD interface running. With the microSD comes one potential problem because we were talking about using SPI.

All memory cards must support all three modes, except for microSD where SPI is optional.

So your saying you could almost fit an Uzebox onto an Uzebox.

What do you mean? The stamp IS the uzebox...and much more. Only the various connectors & jacks are not there. They will be put onto a baseboad (or "motherboard") into which you will plug the stamp. Now thats a full Uzebox!

The nice thing about this approach is that the stamp can be used for pretty much any projects where you would like to have an MCU, output video or sound. Create your own firmware and it can be anything. Add the integrated Micro SD and it's great for any electronics hobbyist!

About the Micro SD, a few mentioned the potential lack of SPI mode. I would not be concerned since two of the big makers supports it: Sandisk and Kingston (See Clay's last picture).

I said that as the size comparison. Basically I mean the uzebox stamp is the same size as the atmega644.